© 2022 SamMobile
SamMobile has affiliate and sponsored partnerships. If you buy something through one of these links, we may earn a commission. Learn more.
Last updated: November 3rd, 2022 at 04:01 UTC+01:00
When Android Auto was released in 2015, it was available on all smartphones running on Android 5.0 (and above). A couple of months later, Google bumped the minimum OS requirement for running Android Auto to Android 6.0 (and above). Earlier this year, the company changed the basic requirement for a phone to support Android Auto to Android 8.0 (and above). Well, Google has now started enforcing its latest policy by stopping older phones from accessing Android Auto.
Over the past few weeks, people running Android Auto version 7.0 to 7.7 on their smartphones are noticing a pop-up in the app asking them to update the app for them to be able to use the feature. However, people with smartphones running on Android OS that is older than Android 8.0 cannot update the app because Android Auto 7.4 is the last version of the app that’s compatible with phones that are running the version of the OS that is older than 8.0.
So, they can neither access the app nor update it to the new version. Basically, they are being cut off from using Android Auto altogether. In other words, smartphones running on the Android version that is older than Android 8.0 will not be able to access Android Auto anymore. That being said, this won’t be a problem for the majority of people as Android 7.0 and prior releases of the OS make up for only 15% of total Android smartphones as of May 2022. If you are an Android Auto user, make sure that your Samsung phone is running Android 8.0 (or newer).
Meanwhile, Google is working on the project ‘Coolwalk’ for Android Auto, which is a significant platform redesign and is expected to arrive soon. 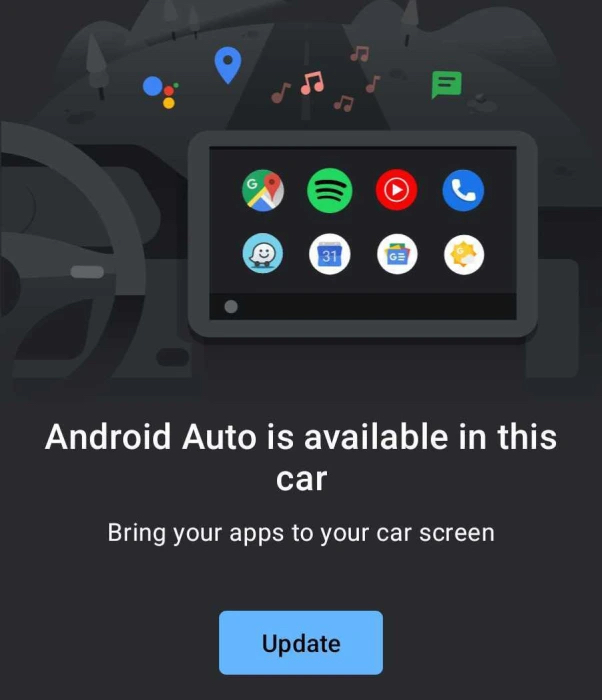 You might also like
The Matter smart home standard, backed by CSA (Connectivity Standards Alliance), has been launched. CSA started certifying products for the Matter 1.0 spec last month, and the new standard is now ready for primetime. The launch event took place in Amsterdam yesterday with support for around 200 products. Amazon, Apple, Google, and Samsung have already […]
Ahead of the festive shopping season, Google is upgrading Gmail with the ability to identify a parcel tracking number from an email and show you its tracking and delivery information at a glance. If you receive an email containing a tracking number for an order, Gmail can now identify it, fetch the tracking information from […]
Google has revealed the list of new changes that will be a part of the Play System update for November 2022 for Android devices. As per the changelog, the latest update will include general improvements to the Google Play Store’s security and enhancements for parental controls and Wallet. Major Android firmware updates are pushed annually […]
After providing convenient shortcuts to its YouTube iOS app via homescreen widgets, the same treatment is now rolling out for YouTube’s Android app. Thanks to the new Material You redesign of the widgets, you can have quick access to the app’s search and other core parts. With this update, you will soon be able to search on […]
With the number of video streaming services increasing day by day, it is getting quite overwhelming for people to hop from app to app to watch their favorite TV shows and movies. What if you could access all those streaming services on YouTube? Wouldn’t it be nice to be able to watch all the shows […]
One of the main reasons for Samsung’s switch from Tizen OS to Wear OS for its smartwatches was the availability of apps. With Wear OS, the Galaxy Watch lineup got access to various Google Suite apps, including Google Maps. It offers an easier way to get navigation help. However, the new update for Google Maps […]
November 2022 security patch
Devices
Samsung Galaxy A04e
SM-A042F
Samsung Galaxy A04s
SM-A047F
Samsung Galaxy Tab Active 4 Pro
SM-T630N
Samsung Galaxy Tab Active 4 Pro 5G
SM-T636B
Samsung Galaxy Watch 5
SM-R900
Samsung Galaxy Watch 5 Pro
SM-R920
Samsung Galaxy Z Fold 4
SM-F936B
Samsung Galaxy Z Flip 4
SM-F721B
Samsung Galaxy Buds Pro 2
SM-R510
Samsung Galaxy Watch 5 44mm
SM-R910
Samsung Galaxy Watch 5 LTE
SM-R905
Samsung Galaxy Watch 5 44mm LTE
SM-R915
SamMobile Weekly Newsletter
Best picks
Social media
Reviews
© 2022 SamMobile

[mc4wp_form]
By signing up, you agree to our Terms of Use and acknowledge the data practices in our Privacy Policy. You may unsubscribe at any time.
Share this Article
Facebook Twitter Copy Link Print
Share
Previous Article Don't buy an Apple Watch for someone who owns an Android smartphone. Get this smart watch instead – CBS News
Next Article Zorin OS 16.2: Shapeshifting desktop to help the Linux-wary feel more at home – The Register
Leave a comment