CNX Software – Embedded Systems News
Reviews, tutorials and the latest news about embedded systems, IoT, open-source hardware, SBC's, microcontrollers, processors, and more
It’s that time of year… CNX Software giveaway week! For the 9th edition, we’ll have seven items to give away, five that I will send myself, and two that will be sent directly from two companies that accepted to add their own products to the giveaway.
We’ll start the giveaway with NanoPi R5S router based on Rockchip RK3568 SoC with 2 GB DDR4 RAM, 8GB eMMC flash plus an M.2 socket for NVMe SSD, two 2.5GbE Ethernet ports, one Gigabit Ethernet port, as well as HDMI 2.0 video output and two USB 3.0 ports. 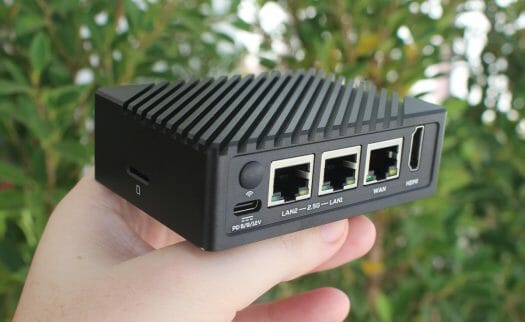 I reviewed the NanoPi R5S router with OpenWrt and Ubuntu 20.04 “FriendlyCore”, but I had to call this a “preview” since 2.5GbE was far from optimal, sometimes only a little faster than with a Gigabit Ethernet link. But I can see the company has released new images, including one based on the latest OpenWrt 22.03, so hopefully the performance has improved. Debian with desktop and Android 12 images are now available as well so the HDMI port has become more useful.
At the time of the review, I also tested an M.2 NVMe SSD on the board/router. It could reach about 380MB/s read and write speeds which may seem low, but the values are expected since the router relies on a PCIe 2.0 x1 interface. 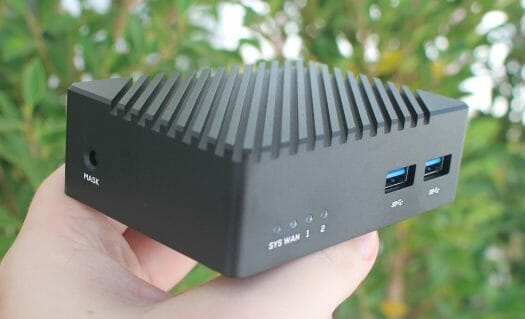 The giveaway includes the router fully assembled. So you’ll just need a 5V/3A USB power adapter if you want to boot the pre-installed OS.
To enter the draw simply leave a comment with your country and whatever else you’d like to say (no links in the body of the comment). If the country is missing, I’ll consider the entry void. Other rules are as follows:
Good luck!
If you don’t win and you’d like to buy the NanoPi R5S gateway with the metal case, you can do so on the FriendlyELEC store,  Amazon or Aliexpress for $75 and up.
Jean-Luc started CNX Software in 2010 as a part-time endeavor, before quitting his job as a software engineering manager, and starting to write daily news, and reviews full time later in 2011.
Support CNX Software! Donate via cryptocurrencies or become a Patron on Patreon

Related posts:
Greetings from Canada! 🍁
Make My Day! 😎👍
Canada! Wouldn’t mind experimenting with this box.
That’d be neat.
United States, and I love reading the reviews and articles you post of various SBCs!
Olivier, France.
Thanks for the nice gesture !
I’ve switched my elderly mom to an Android desktop instead of Windows, that way all her devices look and work the same. But it’s hard to find Core A7x TV boxes. She’s currently on an A72 H96Max, but that’s Android 6 and the last update forced the Launcher to Android TV, which is bad. I’m planning to get her better hardware w/ more recent Android, as soon as I find a good+affordable device… looks like it’s going to be a dev board, not a TV box.
Hello from Singapore.
United States
Woohoo rk3568 go hummmmmm
Hi, David here in the USA. Thanks for the opportunity!
Thank you for the Giveaway Week
Greeting from Taiwan!
Denmark: Love CNX Software! Keep us updated on the good stuff!
Hello from Kingdom of Bahrain.
I enjoy reading cnx articles.
Keep up the good work.
Way Hay…… UK
Tom from Hong Kong
Good evening from the USA
Hong Kong, and I can’t believe it’s been another year already
Vietnam. I look forward to more technical articles.
Would love to own this cool gear 😎
Singapore
Denmark
Hello from Vietnam!
Hello from Vietnam
Hi from Germany and thanks for all the news!
Greetings from Canada!
It seem great. Taiwan, Taipei
Indonesia
Thank cnx. VietNam
Hello from Vietnam. ^^
Gizme from Taiwan.
I’ve bought several NanoPi Neo products from FriendlyElec. They are solid built and well supported. I am sure the R5S could be the best choice for my home router. Hope this is my day.
I just recently got 1000/1000 fiber connection installed in my apartment so this would be perfect.
Sweden!
I tested the NanoPi r4s, despite of a little issue on the management of MTU and VLAN tagged packeds on the WAN port, this little box was awesome to replace the router provided by my FRENCH fiber ISP.
looking forward for the NanoPi r5s capabilities.
Hi from Vietnam, hope i can use this board to replace my old router.
Hello from Finland!

[mc4wp_form]
By signing up, you agree to our Terms of Use and acknowledge the data practices in our Privacy Policy. You may unsubscribe at any time.
Share this Article
Facebook Twitter Copy Link Print
Share
Previous Article Fullstack Academy Partners with Amazon Career Choice to Provide Tech Training to Eligible Amazon Employees – Business Wire
Next Article Isuzu Pagbilao Quezon is latest brand dealer to adopt IOS | Zigwheels – Zig Wheels
Leave a comment