Meeting its promise of a November launch, Apple this week activated its Emergency SOS via Satellite service for iPhone 14 and iPhone 14 Pro models in the U.S. and Canada, with more countries to come. 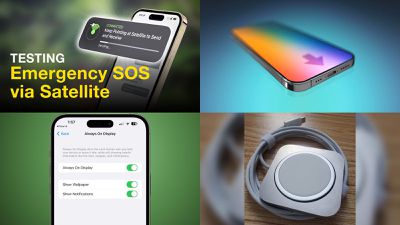 This week also saw some new additions for iOS 16.2 as it works its way through the beta testing process ahead of a public launch next month, while we saw fresh rumors about next year’s iPhone 15 and leaked photos of an unreleased “Magic Charger” from Apple. We’re also about to head into the holiday shopping season, so keep an eye out for some great deals!

All four iPhone 14 models support a new Emergency SOS via Satellite feature that allows the devices to connect directly to a satellite, enabling users to send text messages to emergency services when outside the range of cellular and Wi-Fi coverage. The service launched in the U.S. and Canada this week and is free to use for the first two years.

Emergency SOS via Satellite includes a demo mode in the Settings app, allowing us to test out the feature without actually contacting emergency services. Check out our hands-on video.
Apple said the service will be expanded to the UK and three additional countries in Europe in December.

iPhone 15 Pro models will feature a USB-C port with support for at least USB 3.2 or Thunderbolt 3, according to analyst Ming-Chi Kuo. This would result in significantly faster wired data transfer speeds compared to existing iPhones with Lightning.

While the standard iPhone 15 and iPhone 15 Plus are also expected to have a USB-C port, Kuo said those devices will remain limited to USB 2.0 speeds of up to 480 Mbps.

Starting with iOS 16.2, currently in beta and expected to be released in December, iPhone 14 Pro users can hide the wallpaper and notifications in Always-On display mode. This results in the Lock Screen having a solid black, minimal appearance in Always-On mode, similar to many Android smartphones.

In the iOS 16.2 beta, the new “Show Wallpaper” and “Show Notifications” toggles are located in the Settings app under Display & Brightness → Always On Display.

Images of an unreleased MagSafe accessory called the “Apple Magic Charger” have surfaced online over the past couple of weeks. It appears that Apple decided against releasing the accessory.

The accessory features an aluminum rounded square with an embedded MagSafe charger that can be pushed out into a vertical position. It looks similar to Apple’s discontinued iPhone Lightning Dock.

As usual, customers can receive a free Apple gift card with the purchase of a qualifying product, ranging from any iPhone 13 model to the second-generation AirPods Pro. For more deals, check out our Black Friday roundup and our summary of all the best deals already available.

iOS 16.2 is currently in beta testing and is expected to be released to the public in December. The update includes many new features and changes for the iPhone, such as Apple’s new whiteboard app Freeform.

We’ve rounded up eight new features coming to the iPhone with iOS 16.2, including two new Lock Screen widgets from Apple, improvements to Live Activities, a revamped Home app, and more.

Each week, we publish an email newsletter like this highlighting the top Apple stories, making it a great way to get a bite-sized recap of the week hitting all of the major topics we’ve covered and tying together related stories for a big-picture view.
So if you want to have top stories like the above recap delivered to your email inbox each week, subscribe to our newsletter!

A selection of quick iOS tips that will make you a lot more time-efficient in the long run.
50 features and changes you might have missed in macOS Ventura.
Apple on October 24 released iOS 16.1, delivering iCloud Shared Photo Library, Live Activities, Matter smart home support, and more.
Discover more things your Apple Watch can do since the latest software update.
Expect great deals on a variety of Apple products and third-party accessories as the holiday shopping season kicks into high gear.
New 14″ and 16″ models with M2 Pro and M2 Max chip options as the most significant changes.
New high-end model will move from Intel to Apple silicon.
Apple’s most powerful Mac will finally shift to Apple silicon.